As we all know BBAW has already started and unfortunately I did not really get time to get excited enough. I have been busy managing bookings for my parents visit in December, looking for a job, completing the final PR (permanent resident) formalities, looking for an apartment and a few other things. I have managed to somewhat read and comment on some of my favorite blogs. I did do the things required for BBAW though, sign up and Interview swap and all that. But I feel kind of exhausted.

We did go to Pulau Ubin Island for the long weekend which was a good change but was not really relaxing since we cycled around the Island the entire day.

I opened my google reader today and realized that today was the first day for BBAW. Although I did want to post as required for all the given topics, today’s topic had to take a backseat. It’s difficult to list one blog when I have around 100 blogs I love.

But now that the bookings are done and the hunt for the new apartment is streamlined a bit, I think I can relax and enjoy BBAW. I’m excited for tomorrow’s Interview swap although I wish I had taken more time to set the questions.

And since I’m posting today I thought why not take part in Monday Mailbox as well. Somehow I always forget to post Mailbox Mondays.

I got 2 books. One is YA, the other is non-fiction 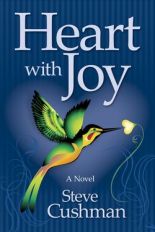 Heart With Joy by Steve Cushman
In Heart With Joy, fifteen-year-old Julian Hale’s life is turned upside down when his mother suddenly moves from North Carolina to Venice, Florida under the pretense of running her parents’ motel and finishing the novel she has been working on for years.  While Julian has always been closer to his mother and wants to go with her, she tells him he has to stay with his father until the end of the school year.
Six weeks after his mother leaves, Julian’s father decides to run a marathon.  This surprises Julian because he has never seen his father exercise, but once he agrees to help him train the two develop the sort of close relationship they’ve never had before.  Also, with the help of an elderly neighbor, Julian learns that the most important thing in life is to follow your heart.  And Julian’s heart leads him to a passion for cooking and a young cashier at the local grocery store.  By the end of the novel, Julian is forced to choose between staying with his father and going to live with his mother.
Heart With Joy is an uplifting coming of age novel about cooking and bird watching, about writing and pottery, and about falling in love and the sacrifices we all make.  But ultimately, it’s about the importance of following your heart and trusting that it will take you where you need to go.

Beyond the Comfort Zone by James M Turner
How does one make the journey from the glitzy world of Showbiz to the dark and dangerous world of International Child Trafficking?
As one of the UK’s premier session musicians James M Turner led a life most only dream about, playing Saxophone with some of the UK’s best selling Artists and traveling the globe performing to legions of adoring fans. So, as he stood on stage at Wembley Stadium, raised his Sax and 70,000 people screamed into the night air, he could have been forgiven for thinking that his life would always be this way.
A few short years later however he would find himself deep in The Golden Triangle, fighting for his sanity and survival as he attempts to infiltrate and capture those engaged in the tearful trade of Human Trafficking.
‘Beyond The Comfort Zone’ is the story of one man’s extraordinary journey, from the stages and T.V. Studios of the world to the Jungles of South East Asia.

I’m looking forward to reading both these books.

14 thoughts on “Mailbox Monday and BBAW”