My thoughts:
Bonobo Handshake by Vanessa Woods is based in Congo Africa. Vanessa Woods is a research scientist in California. She is also an author and has worked for NatGeo. Bonobo Handshake is, yes you guessed it right, about Bonobos. How many of us know that Bonobos along with chimps and gorillas are closest to us in terms of gene count? But sadly, world is so focused on chimps that people tend to forget or overlook these relatively small apes.

Vanessa Woods moved to Congo with her boyfriend since he was a research scientist and wanted to conduct research on Bonobos. Having worked with Chimps before and having no interest in Bonobos or Congo for that matter, the move was a huge sacrifice for her. But as she came to know the animals, she eventually fell in love with them.

This book is not just about Bonobos. It’s a nice mix of her personal story, the political story of Congo and Bonobos. Congo has suffered extensively for its oil, gold, diamonds, Cobalt and so much more. Instead of strengthening the economy, it has resulted in many wars and suffering. And along with the economy and the people, the wildlife suffered too. People want money and the fastest way to have it is to sell Bonobo’s. They are tortured and orphaned. Most of them are sent to the Lola Ya Bonobo sanctuary when found by well-meaning individuals. 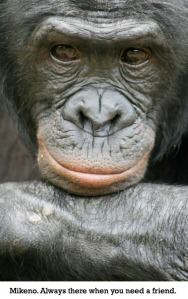 It was here, at Lola YA bonobo, that Vanessa and her boyfriend (later husband) conducted experiments on the Bonobos. These experiments are important because other than comparing them to chimps they are also a key to a better world. By understanding the way Bonobos deal with conflicts we could understand more about how humans deal with conflicts too.

I simply LOVED the book. What more can I say? After the first 20 pages I couldn’t put it down. You would possibly like it even if you don’t like non-fiction because this book is page-turning. It’s a detailed, human, interesting and heart warming look into Bonobos and the people who look after them. I fell in love with Bonobo’s after reading this book and I’m sure you will too. Since I borrowed this book from the library I hope I find a copy for my personal shelf.