My thoughts:
Malika Oufkir was born in Morocco in 1953 in a powerful family who had close relations with the King. When she was 5, the King adopted her so that she could grow up as a companion to his daughter, Lalla Mina. She grew up in the palace with her and had the best of everything. The king was also very find of her and she considered him her second father. But over time she started feeling lonely. So one day she asked the King permission to go home. The King reluctantly said yes. The next few years were spent with her own family, with her mom who was a very fashionable lady and who was fond of all good things in life, her father who was climbing the success ladder very quickly and her siblings.

But when she was 19, there were political unrest’s in the country, there was growing unrest among the people against the King. Amongst this chaos, her father was arrested and executed and her entire family- her mother, her 3 younger sisters and 2 younger brothers were arrested and sent into an isolated dessert goal. The youngest boy was only 4 years old then. The Oufkir family spend the nest 20 years of their life in prison and house arrest.

Stolen Lives was so difficult to read. Just imagine those kids growing up in prison, never experiencing normal things and emotions. My heart goes out to the youngest though, Abdellatif. He spent his entire childhood and teenage years in prison. When he was 8, he tried to kill himself. My heart nearly broke when I read that.

Somehow he’d imagined, in his little mind that was too mature for his years, that killing himself would be the best way to get us all out of this mess. He didn’t want to see us suffer anymore. From that day on, we vowed to spare him. We wouldn’t talk in front of him any more, we’d hide our grief from him, we’d invent a fantasy life for him and we’d get him to believe in it.

The Oufkir family escaped by digging a tunnel through the prison, another example of how their minds were shaped with intellect even after so many years in prison. If they wouldn’t have escaped, they would still be in prison.

Stolen lives is not just a story of survival, but that of surviving without loosing dignity. I first saw this book on Amazon while random browsing. So when I saw this in Srilanka I immediately picked it up. But when I saw the seal of “Oprah’s Book Club” on the cover, I had second thoughts. I’m so glad I bought it though. 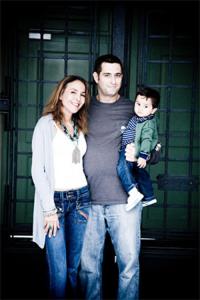 I have immense respect for Malika and her mother for going through what they did. Malika especially, who almost bought up the kids in prison, who made up history, geography and Math lessons for the kids so that they don’t grow up uneducated, who along with the others help directed plays and made the kids act in it to break monotony and stop depression from creeping in.

I really hope you give this book a chance even if you don’t read a lot of memoirs. This is one book that will stay with me forever.

Note: In 2006, Malika and her husband adopted a baby boy from Marrakesh, Morocco after Malika was unable to conceive because of the scars that are still left by the 20 year imprisonment.