We were supposed to return on 17th but my husbands work got postponed, so we came back yesterday instead. I’m so refreshed. It was such a good change.

We visited quite a few places at weekends. Srilanka is sooooo hot this time of the year though. We did a little of both, luxury traveling as well as backpacking. Both were fun. We visited a few Buddhist temples, 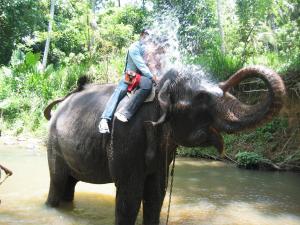 did jet skiing, held a croc

Colombo is not as developed as I thought the capital of a country would be but its understandable since there were important things like the war to concentrate on. Now that the war is finally over, Srilankan’s can enjoy a peace and freedom. Still, there were a lot of policemen and Army people on the road. every time we went out we were stopped for random checking. It surprising how you get used to it after some time.

I read 4 books, reviews of which would be coming up soon, I hope.

I was pleasantly surprised by the large number of bookstores in Colombo, there is one for like every 5Km. I bought 3 books, 2 of which are by Srilankan authors.

My MIL is visiting us for a month, she’ll be coming tomorrow, so I guess I’ll be busy but I might get time to blog and comment. Hopefully.

I missed the readathon, I’m sure it must have been fun. So how have you all been?