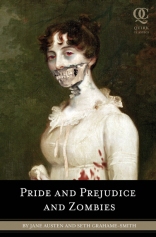 Title: Pride and Prejudice and Zombies

About the book (From GoodReads):
It is a truth universally acknowledged that a zombie in possession of brains must be in want of more brains.” So begins Pride and Prejudice and Zombies, an expanded edition of the beloved Jane Austen novel featuring all-new scenes of bone-crunching zombie mayhem. As our story opens, a mysterious plague has fallen upon the quiet English village of Meryton—& the dead are returning to life! Feisty heroine Elizabeth Bennet is determined to wipe out the zombie menace, but she’s soon distracted by the arrival of the haughty & arrogant Mr. Darcy. What ensues is a delightful comedy of manners with plenty of civilized sparring between the two young lovers—& even more violent sparring on the blood-soaked battlefield as Elizabeth wages war against hordes of flesh-eating undead. Can she vanquish the spawn of Satan? And overcome the social prejudices of the class-conscious landed gentry? Complete with romance, heartbreak, swordfights, cannibalism & thousands of rotting corpses, Pride and Prejudice and Zombies transforms a masterpiece of world literature into something you’d actually want to read.

After the initial fit of giggling and comparing the first chapter with the original, I settled down to actually read the book in all seriousness. And now after having read the book there is only one question in my mind. Why was this book even written? I mean really it’s just a page by page copy of the original with occasional sprinkling of Zombies and Zombie slang here and there. It would be safe to say that it’s more than 80% similar.

Considering how well this book is doing I’m kind of surprised. I would not be fair to authors who write a book from scratch. Here Seth Grahame-Smith had everything at his disposal, a great setting, a great plot and awesome characters that you’ll never forget. To be fair the book does say it is written by Jane Austen and Seth Grahame-Smith. But does that make it alright?

Don’t get me wrong. Although I’m a huge P&P fan I’m not sensitive to altering the original or of the countless sequels if it is well done. If you read the blurb, it says “ultraviolent zombie mayhem”, I mean really? There were occasional zombie’s attacks in the book but the zombies were very easily killed or dispensed. And the attacks hardly lasted for more than a page.

I feel it was a very good idea very badly executed. The author had just modified the fate of Charlotte and Wickham in the book. The charlotte angle was well done but the Wickham one wasn’t, it was absolutely unnecessary and illogical. In fact that’s how I felt about the book. Unnecessary. I felt cheated and it feels like this book is just a ruse to make money from a beloved classic and Jane Austen. The only positive thing was it felt like I re-read Pride and Prejudice which I had been meaning to do for some time 🙂

BUT…Care, I cannot thank you enough for sending me the book. I have one book less in my “REALLY want to read” list. Also, I might as well cross out Sense and Sensibility and Sea Monsters from my wish list 🙂 Score!!!

If you have liked the book, please do spread some light on why is it so successful. If you haven’t tell me why you didn’t like it. If you haven’t read it, why not? Will you be willing to give it a chance?

29 thoughts on “Pride and Prejudice and Zombies…really?”