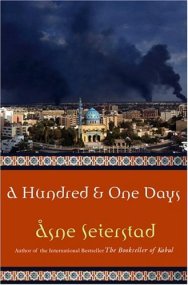 A Hundred And One Days by Asne Seierstad

Iraq’s deterioration as a nation started in 1980 because of the 8 year Iran-Iraq war started by Saddam Hussein and then the disastrous invasion of Kuwait 2 years after the war. And then there was the 12 years UN sanction.

Asne Seierstad goes on a 10 day visa as a reporter in Baghdad for Scandinavian, German, and the Dutch media. She is there to cover a possible war between Iraq and America. But Iraq is in the clutches of Saddam Hussein and the journalists are not allowed to go anywhere without a minder and without getting written permission from the Ministry of Information, which is like keeping watch on the foreign journalists and what they could possibly leak to the outside world. Saddam Hussein wanted the entire world to know that his people love and respect him and that Iraq has prospered under his regime.

Asne is caught between wanting to write something of value and fearing the wrath of the Iraqi Ministry and being kicked out of the country. And she wants to be there for the scoop and the major stories when war hits.

I am here to find dissidents, a secret uprising, gagged intellectuals, Saddam’s opponents. I am here to point out human rights violations, expose oppression. And I’m reduced to being a tourist.

This book is divided into 3 sections -Before, during and after.
When Asne came to Iraq, she had only 10 days visa and like other journalists she wanted to extend her stay as long as possible. The things she did to extend her visa and also to come back after leaving Iraq once after her Visa expired, was very interesting. You can’t help but admire her persistence.

Iraq’s citizens are preparing for war, some are leaving the country, and some are stocking food and other essential things in case the war lasts longer. As Asne slowly and steadily goes into the heart of the city, she gets snippets of what exactly is beneath the surface. And then one day, the inevitable happens.

At four in the morning Bush’s ultimatum expires. At five-thirty the first bang is heard. I am wide awake, my heart thumping. I sneak out onto the balcony, first crouching in case of missiles, then standing up. Powerful impacts, air-craft noise and vigorous shooting from the Iraqi anti-aircraft missiles can be heard. From the balconies above I hear a Babelesque confusion of voices-Spanish, Arabic, English, French. We all stand staring out into the half-light and see the dim outline of the Presidential palace on the opposite side of the Tigris.

Most of the Iraqi’s secretly want to get rid of Saddam Hussein so in a way they are waiting for the Americans to start a war. Bush had promised to bomb only military sites. So they think they are safe. But once the war starts, things start to get ugly. Hundreds of innocent citizens are killed. The destruction, the mayhem caused is unbelievable. And so is the Bush bashing.

It’s very difficult to stop because I don’t want to give away everything. Can you tell I loved A Hundred and One Days? It read like a thriller. I got insights into how journalists report in war zones. It was fascinating and scary. Asne Seierstad is one brave woman.

Reading this book was like lifting a cloud of doubt and confusion that had settled itself in my mind after watching tons of conflicting news and documentaries over the years about the American Invasion of Iraq and the Saddam Hussein regime.

Its not that I know everything now, but I believe I know every side of the situation and can now watch or read one side of it without being confused or without getting anything else I read about it in the way. Why did some Iraqi’s rejoice and some mourn the defeat of Saddam Hussein? Why were Iraqi’s so against the Americans when they liberated them from a tyrant? You’ll understand all this and more when you read this book. Finally, my heart goes out to thousands of Iraqi people who suffered for years under Saddam Hussein and are still suffering in one way or the other. I really hope peace prevails soon.

Oh by the way, Asne Seierstad is also the author of Bookseller of Kabul.

I am adding this to Orbis Terrarum Challenge. The author is from Norway

18 thoughts on “A Hundred and One Days: A Baghdad Journal”