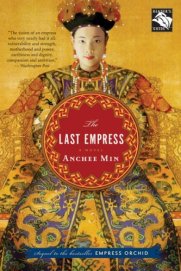 The first book Empress Orchid is about how a young village girl of 17 called Orchid becomes the Empress of China. The book ends with her husband’s death and with her taking the reins of the kingdom. All I can say is please read Empress Orchid. Here is my review from last year.

The next book ‘The last Empress’ is about her rule as an Empress.

It was the time when the foreign powers like Austria, France, Germany, Great Britain, Italy, Japan, and Russia were trying to rip china to pieces and trying to establish their own trade in the country. It was the time of tremendous turmoil when the missionaries came to preach Christianity and set up churches in the country. It was also the time of the Boxers Rebellion which the shook the entire country and the Forbidden palace as well.

When her son, the Emperor of China died of a disease she had to take over the reigns of the country and also train a new emperor. She chose her sisters son Gong and adopted him. But Gong was basically a weak child and was plagued by depression in his twenties. At the age when she wanted to retire and let her adopted son manage the kingdom, she realized her son was unable to take the right decisions for the benefit of her country. He embraced the wrong people and the Empress was unable to do anything about it.

It’s amazing and sometimes shocking to see how foreigners exploited China on its own land. They came to China under some pretext or another and when there was no reason for them to be there, they refused to leave. When there were uprisings because of the foreign invasions, they had the audacity to demand more money and acquire more land in China. Even the missionaries were used for this purpose. When the Chinese rebelled against the missionaries and their agenda to convert as many people to Christianity as possible, the people rebelled. Some of the missionaries were killed. Again the foreigners had the audacity to ask compensation for it.

China was eroding slowly and there was nothing anyone could do about it. The people of China blamed the foreign invasions and in turn the government for not getting them under control.  On top of all this were the natural calamities like floods and draughts.

And caught between the midsts of all this was the Empress of China. Her husband failed her, her son failed her too and the adopted son was very easily disheartened. She was the only hope of the Chinese people. At the age of 61, instead of watching her son take over the throne and give her some rest, she had to endure her son’s illness, his depression and finally his death. She took over the reins because of her love for China and its people. In spite of all this she was always held responsible for her husbands and sons death and many other wrong doings all because people thought she wanted to stay in power.

Anchee Min described the Empresses possible state of mind very well. She brought to life one of the strongest and most famous personalities of Chinese history. She gave a human touch to her that was far different from what the historians and the foreign reporters put forward. She showed her daily struggle with the court members, training an heir for China and repressing her inner feelings and cravings for love. Just reading about what she faced exhausted me.

After reading the first book Empress Orchid, I was fascinated by a woman called Orchid or the Last empress of China, but after reading this book I feel honored for knowing this woman even if it’s just through a fictionalized account.

Essentially there are 2 different viewpoints to what the Dowager Empress of China was. One that she was an evil mastermind who wanted only power and the other that she was a result of circumstances and did her best for China and it’s people. I am ready to believe the later.

20 thoughts on “The last Empress”