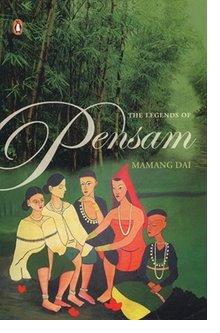 I avoided reading this book for a long time. Partly because I thought it was a book of short stories and partly because I do not like reading Indian authors. It’s not that I haven’t tried, I have, but they have been a major disappointment most of the time. That doesn’t mean they are bad, obviously not, it just means that their writing is not to my taste. But recently I have read a couple of books which were really good.

Legends of Pensam is one of them. It is actually a book of short stories which are interconnected so it doesn’t really give you a feel of reading separate stories. Every character and every story is intermingled.

The book is set in the territory of Adis in the mountains of Arunachal Pradesh, India. It is set in Pensam which is known as an in-between place. The book is an intricate web of stories, images and the history of the tribe.

In our language, the language of the Adis, the word ‘pensam’ means ‘in-between’. It suggests the middle, or middle ground, but it may also be interpreted as the hidden spaces of the heart where a secret garden grows. It is the small world where anything can happen and everything can be lived; where the narrow boat that we call life sails along somehow in calm or stormy weather; where the life of a man can be measured in the span of a song.

It’s a land of mountains, rivers, old legends, spirits, and resilience. The narrator takes us through this region and its stories. Born and brought up here the narrator knows many people and their past and present stories, some true, some legends.

There is a story about Hoxo who was believed to have fallen from the sky. One day his father brings him home and tells his wife and the villagers that the sky has gifted him this boy. In this land of spirits and mountains where anything can happen and everything can be lived, no body questions this.

There are stories of hardship, of men and women accepting their fate and making the best of it.

And I saw again how their days were passing; the fire burning brightly in the hearth, the dogs curled up close to the flames, the cot in the corner. Life moved on quite normally, except that like so many others in so many unseen recesses all over the world, they hid their pain, while the seasons turned.

Out of all the stories, there is one particular story which I loved. The story of Nenem. Nenem is the only daughter of a respected elder of a village. She makes the mistake of falling in love with an Englishman, David. Obviously it creates a scandal. But David cannot stay there for ever and Nenem cannot leave her mountains, rivers and her land and go with him. So they part ways.

At night the sky above the village was full of stars, and every night Nenem said to herself,’No one dies of love. I loved him, and now I am enough on my own.’

After some years Nenem resigns to her fate and gets married to Kao. She has one girl with him. Although she is a good wife to him, she is always distant and detached. As time passes she is finally content with what she has. A home, a husband and a daughter. After some years though when their village is flooded, they have to move to another place. That’s when she cannot take the pain and goes to the river one day only to be found dead.

But what I found most appealing is not the stories, but the language. Mamang Dai is so good with words that I sometimes read the passages twice just to re-experience the beauty of her words. Not a word is misplaced, nor a metaphor unnecessarily added. The description of the mountains, the rivers, and the rain is so beautiful that you feel transported to the place or you at least wish you were there.

In dreams, my people say, they see the rain mother sitting on the treetops, laughing in the mist. Her silver ornaments clink as she rides the wind, brandishing her sword.
Every time she twirls her skirt, the storm clouds edged with black rush up to cover her.

But these are my most favorite lines from the book.

The most beautiful thing is that we are all bunched up together on oceans and cities, and deserts and valleys, far apart from each other in so many ways, but we have words, and the right words open our minds and hearts and help us recognize one another.

Read it to experience it.

12 thoughts on “Legends of Pensam by Mamang Dai”