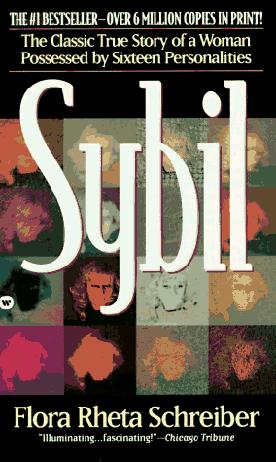 What do you know about multiple personality? Have you ever interacted with anyone who is one? Although I knew the concept but I had never really given it much thought. Until I read Sybil. I realized after reading the book that human mind and emotions are so complex. I already knew that but never really understood the depth of it.

Imagine living with frequent blackouts. Where you cannot account for time, for places, even people. Imagine meeting someone for maybe the 10th time and not remembering where you had met the person before. Or worse, imagine yourself in a completely different city and not knowing how you got there.

All this and more happened to Sybil for almost 40 years of her life.

Sybil Isabel Dorsett was born in a rural down in a very strict, conservative and orthodox family. Her dad was a building contractor. Her mom was a housewife. When Sybil was in college, she experienced extreme nervousness and something called hysterics. It got to a point where the college refused to take her back unless a psychiatrist said she was fit to rejoin.

She started treatment from a Dr. Wilbur in her town. She suggested Sybil to either enroll in a hospital for an extensive therapy course or enroll for psychoanalysis in Chicago. Unfortunately, both didn’t materialize. Dr. Wilbur shifted to New York and Sybil was left alone to deal with everything without the support of her parents. They thought being psychoanalyzed was against their religion. So they refused to cooperate much.

Sybil, after convincing her dad, moved to New York for studies. After some time she started her therapy with the same Dr. Wilbur. The book deals with how Dr. Wilbur analyzed the case and discovered that Sybil had no amnesia but multiple personality disorder, how she got to the cause of the disorder and finally how she cured it.

Sybil had an abusive mother who was a schizophrenic. She used to physically and mentally torture her since she was an infant. Some of the incidents described in this book are truly horrifying. At the age of 3 and a half, Sybil’s mind rebelled against the torture; she tried to hide under a different person so that she can save herself from all the horror. This is when one of her first multiple personalities emerged. To think that a child of such tender age has to undergo this is enough to suggest the amount of torture she must have gone through.

In the course of the analysis over many years, Dr. Wilbur discovered 16 different personalities and the reason for all the personalities to emerge. She formed a bond of friendship with each of them. Sybil was unaware of all this until Dr. Wilbur told her about it. Her case was one of the most complex and pioneer cases of that time.

We have a happy ending here. All the personalities were gradually integrated with Sybil. Sybil, when the book was written, was a professor in a school in Pennsylvania and doing fine.

Sybil was an intelligent woman. In spite of the description of her disorders, I don’t think anybody will fail to see that.

I was going to keep this post very short, but somehow once I started writing I couldn’t stop. The more I think about the book the more the word Shocking comes to my mind. All I can say is ‘Read it, to believe it’.

After writing this review I googled a little. It seems like that is a lot of debate on the credibility of this novel. Sybil’s real identity was discovered and she was said to be Shirley Ardell Mason. There are many people who say her doctor invented this illness by hypnotizing her and keeping her on a drug. There is an entire webpage dedicated to Shirley Ardell Mason. After the book and the movie based on this were released, the number of cases reported on multiple personality disorder (MPD) went up considerably. Recently, the illness was renamed dissociative-identity disorder (DED).

Even if this book was entirely or even partially fictional, I think it’s a fantastic read.
If you are interested in MPD go here or if you want to know more about the real Sybil go here. There are a lot of links at the bottom of the page which will take you to Sybil’s paintings, her obituary and stuff.

10 thoughts on “Sybil: A woman with 16 multiple personalities”