Finally. Here is the review of Immortals: The crossing. I finished this book more than a week ago. I won this book through Vivi Anna’s site and Joy Nash sent me autographed copy. 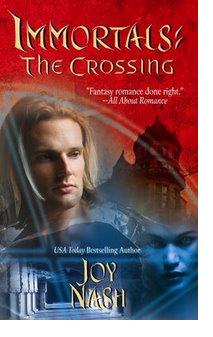 This is my first book from the Immortal series. I was a little apprehensive about reading it as I wasn’t sure I would be able to enjoy the book not having read the previous ones. But I did enjoy it. There were places where I felt it would have been better if I had read the previous books, but it wasn’t absolutely necessary. I could follow the story line and understand what was implied well enough.

Okay here is the story in short. Mac is a Semi God. I was not really sure what that meant, but it implied that he was immortal. He is a charismatic musician with hordes of girls stalking him. He is also the protector of the fairies in the magic world. When one of the fairy villages is attacked and an infant’s life is in danger, he is called to intervene. He discovers that the village is attacked by an American Witch who has powers of her own. She is out to rescue something that is very dear to her. Of course she doesn’t tell Mac about it. Mac tries to stop Artemis (the witch) from destroying or attacking anyone else by placing her under a house arrest. But she escapes and he follows her, literally, through hell.

In the end, they win. Obviously.

What I liked about the book was the pace. There wasn’t a single dull moment in the book. The main characters Mac and Artemis were well crafted. I especially liked Artemis. She was not weak and did not need anyone’s protection. She was capable of finding her own way. Although Mac helped her, he was not exactly her knight in shining armor. She was determined and strong.

The description of hells’ levels was comic and chilling at the same time. I had one question though. Considering Mac’s mother was god (I think), why is she said to be devoid of any emotions? Did not make much sense to me but may be it has something to do with the previous books in the series. No complaints though.

People who love romantic and paranormal books, this one is a treat. I am looking forward to reading Joy Nash’s next.

7 thoughts on “Immortals: the crossing by Joy Nash”